This post explores the Yates St. Community Garden. Situated in the heart of downtown Victoria, on the homeland of the Lekwungen people now known as the Songhees and Esquimalt Nations, the garden
boasts 75 plots.

In 2016, the Yates St. Community Garden started with the Downtown Residents’ Association forming the Urban Livability Committee. In the months that followed, advocacy work began within the community, a non-profit organization was founded, committees were formed, and grants were written. Fast forward to the launch of the “Growing in the City” initiative and the evolution of the original garden committee to the Yates Street Community Garden Steering Committee, and you can see how organizations came together to build the garden as it is today with 75 individually allocated boxes. This is one of three types of community garden spaces defined by the City of Victoria.

On a warm summer Tuesday morning, Garden Coordinator, Laura Fraser, and volunteer, Janet Strauss sat in the tranquil garden space to take me through the beginnings of the garden which is a  now-thriving location that was just an empty pit several years ago.

Some community members can’t decide to start a garden anywhere and  just let their shovels hit the soil, Janet explained to me. The City of Victoria requires a community engagement process and for a non-profit organization to help in the governance and management of the space.

Walking into the Yates Street garden is transformative. My reaction was like that moment when you travel by motorboat to the middle of the ocean and shut the engine off. Tranquility envelopes the space, and it’s hard to focus your vision to one area.

Laura describes entering the garden as, “… a community of gardeners. People are always really excited to share [or] show their gardens and are proud of what they’ve grown and they’re always willing to share information with each other.”

Janet’s reaction is similar to my own, “[The garden is] also a little bit of an oasis with all the construction and all the cement and traffic. It’s really nice. We’ve observed over the years that we’ve been open, community members that aren’t necessarily gardeners enjoy coming in and just sitting and having their lunch or whatever. [That’s] kind of one of what our original aims was: to make a [little meeting] space because we don’t really have parks in the downtown area or a community centre or things like that.”

Laura adds, “You wouldn’t really expect it to be here. A lot of people walk by and [say], ‘Oh, I didn’t even know this was a garden!’”

An allotment garden is defined by the City of Victoria as, “individual garden plots that are maintained and harvested by individual gardeners.” This is what you find at the Yates Garden: rows of numbered 3 feet by 3 feet boxes containing an individuals’ unique choice of plants. Although it may fit into the general category of allotment, these snug boxes are an interesting feature of the space. No roots can enter the ground because it is remediated land; the toll of hosting a dry cleaner for 35 years. The process of remediation treats the toxic chemicals that have seeped into the small lot over the years and takes up to a decade to become usable land again.

While the remediation, as Janet explains, is why they were able to create the space in the first place, it does create a potential ticking clock as to if or when the City may re-purpose the space.

Laura chimed in, “… [we] can give [people] little chunks at a time but we don’t know if this is going to be here forever or if they’re going to decide to put a building up.”

They have made it through their first three-year lease, and currently sit at year 5 of the space based on one-year leases.

Despite the challenges of an urban space – noise, construction, traffic, dependence on volunteers in a transient downtown area – the garden is a success story. When I asked Laura how she would define success, she shared, “I’d say happy gardeners. Just building community. Growth. We’ve definitely grown since we started by adding more boxes and we’ve got an apiary and we’re celebrating pollinator week every year.”

Janet added, “[It’s] a way to bring all kinds of different people that live downtown together, that maybe have only moved down for a short period of time. [A] lot of our gardeners are from Ontario originally or Quebec and it brings a cohesiveness to a place that really didn’t have a neighbourhood feel to it. I think it’s really contributed to the feel of the neighbourhood.”

One specific story from Janet: “We have an individual, a couple of individuals, [from the Disability Resource Centre], but we have one individual in particular who suffered from anxiety and depression and she says the garden has saved her life. She comes every single day. She maintains our boulevard [gardens].”

Laura continued, “She’s like our ambassador, kind of. She’s always here and greeting people and welcoming people and she says she doesn’t know what she would do without the garden… and especially since [the COVID-19 outbreak], her volunteer activities have been cancelled so this has been especially important for her to have a place to come to.”

Community engagement is one of the many reasons community gardens are created and encouraged by the City.

How does Yates St. keep community engagement going, even when the allotments are full?

Laura explained, “Well we’ve kind of, if you’ve noticed, spilled out onto Yates Street, onto the boulevards. [Hopefully] people see that and get inspired to garden and then they walk by and see [people here] enjoying gardening. I think that’s a big part of it. Also the apiary was something we didn’t really expect but it’s brought a lot of community just learning about pollinators and then having events here.”

Janet added, “[This] year we weren’t able to proceed with it but bringing daycare children [because] they don’t have a lot of green space [downtown] and we have a children’s box and a pollinator box. Last year this time, they came in and did a little program about pollinators. [We] hope in future we can continue to provide an opportunity for pre-school and daycare children that are in the downtown core in daycares.”

Laura continued, “I feel like we’re pretty lucky. A lot of our gardeners are really willing to volunteer and be a part of work parties and we have a lot of the same people that have been here for a few years, so I think that helps.”

As we wrapped up our conversation, I asked Laura and Janet if there was anything they wished the public knew about their garden.

Maybe just that it’s here. A lot of people that even live close to here don’t realize [as they are] biking by or driving by that it’s here. For me, especially, it’s important. This is my only gardening space. People don’t really have the option of sometimes growing food at home so it’s nice to have this community space.

I think it inspires people, too. I mean, I’ve noticed so many more balcony gardens around the neighbourhood and people come in to see what’s growing and I think it’s a really inviting, welcoming place that people have responded to.

Next time you take a walk down Yates Street, consider getting involved f in this space. You can  send Laura an email and ask to join a work party, get yourself on the waiting list or bring your book club or knitting group to appreciate the serene space.

Stay tuned as we travel next week
to Vic West!

This blog series explores different community garden spaces around the province to discover all the ways these gardens are developing community connectedness, creating spaces for education, food and medicine growing, and connecting people to land and nature.

About the Author: Phoenix Bain is a communications professional and uninvited settler living and working on the homeland of the Lekwungen people. Phoenix has co-developed this blog series with Aaren Topley, Can You Dig It Provincial Manager as a way of showcasing the amazing community building work happening in gardens throughout the province. 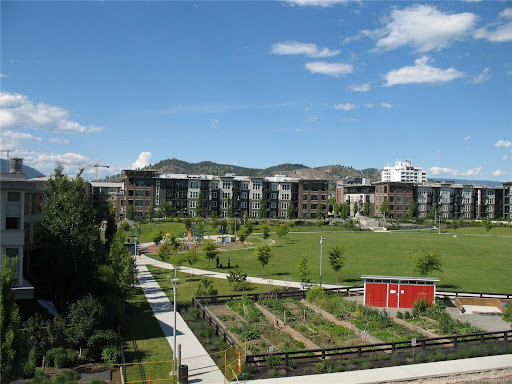 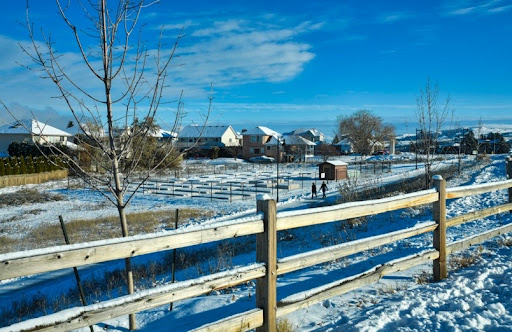 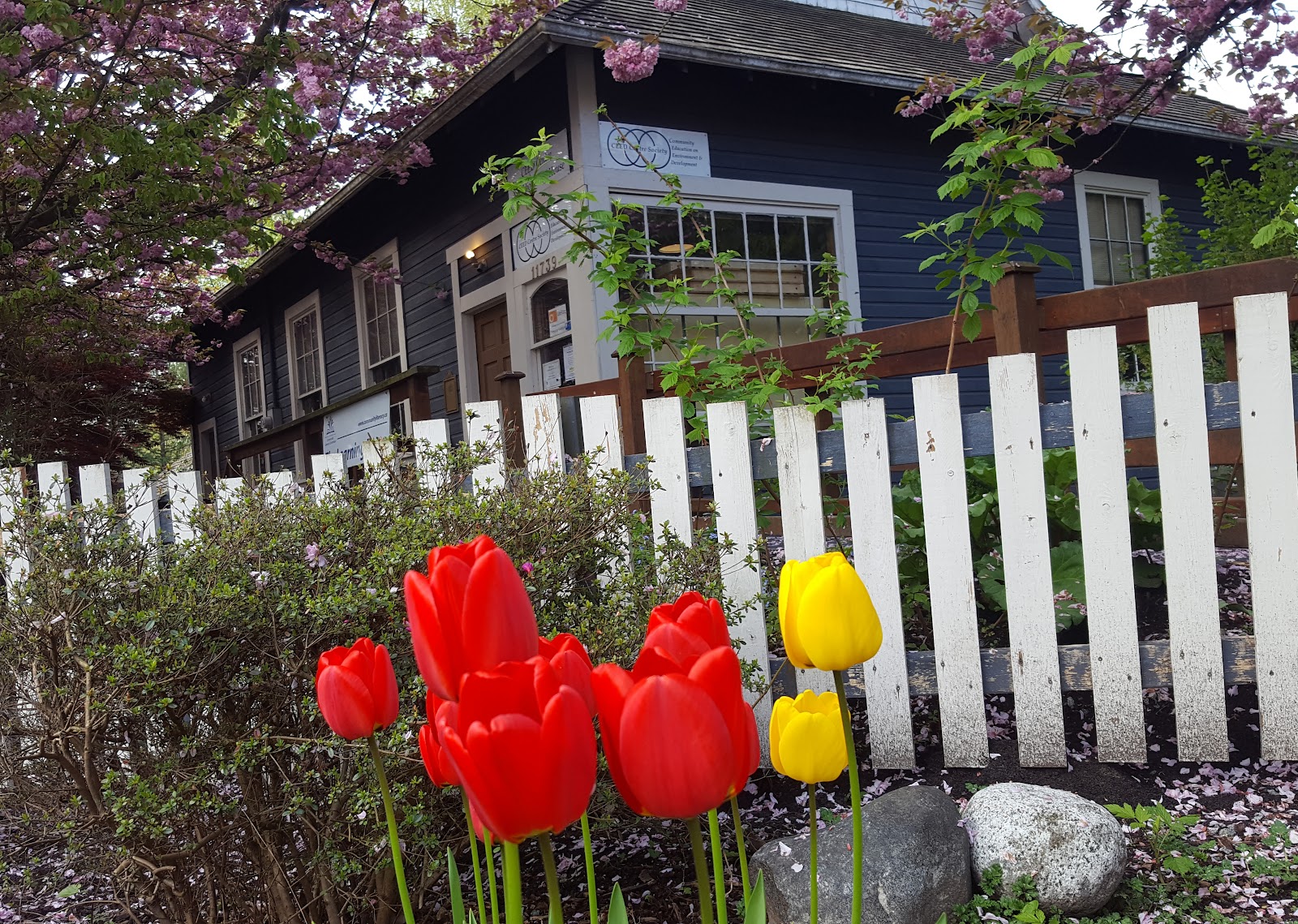